Flywheel energy storage systems store mechanical energy in the form of rotation. The rotational energy builds on the law of intertia. Already in antiquity, flywheels with a high mass moment of inertia were used. The storage technology accompanied all industrial revolutions (including todays Industry 4.0).

The oldest invention, which makes use of the mass moment of inertia, can be traced back to 6,000 BC.  In China and later in Mesopotamia spindles were used for the production of threads. These spindles consisted of a wooden stick as an axis and a small disk with a central bore made of natural materials such as stone, wood, metal, clay, glass or bones as a rotating mass. The spindle was suspended directly on the fibers to be rotated and was brought by hand in momentum.

Another early application of flywheels is the potter’s wheel. It came into use around 4,000 BC., probably also in Mesopotamia. Today it is believed that flywheels were invented even earlier than the wheel in mobile applications. This makes the flywheel the oldest machine in human history. In Central Europe, however, this technique was used around 400 BC.

Later, the newer spinning wheels, which were driven by a running board and a shaft, equipped with a large flywheel. Even opticians often installed an additional flywheel on their grinding equipment to increase their rotational stability. Also in the Middle Ages water and wind mills made use of the inertia of large flywheels to compensate the unsteady driving force and the permanant changing load situations (first load management). It was in the 17th century that Galileo Galilei formulated the law of inertia, which was applied for centuries but could not be explained until Galileo.

With the first industrial revolution, the flywheel in steam engines, tool drives and later also in drives are mainly used to harmonize irregular rotational power and to guarantee smooth running (active balancing power). Examples are the old one-cylinder steam and diesel road rollers or eccentric presses. From the 19th century flywheel were (and still are) used for transmission of piston forces on the drive train in internal combustion engines.

The first flywheel energy storage used purely for energy storage was made of steel and was developed in 1883 by John A. Howell for military applications. It had a mass of 160 kg with a diameter of 45 cm. Accelerated to 21,000 rpm, it was able to transport a torpedo 1.5 km through the water at an average speed of 55 km / h.

From the 1950s, increasingly modern developments spread. The Swiss company Oerlikon constructed the first mobile flywheel energy storage for public transport with buses (gyrobus), which was built from steel in a hydrogen atmosphere. 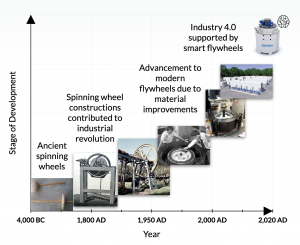 The areas of application extend all the way to renewable energies. The Rutherford Appleton Laboratory in the UK was investigating the use of flywheel energy storage for wind energy. In island operation, a test wind power facility with 45 kW, a diesel generator and a flywheel energy storage system was built, which was used as a buffer in volatile winds and start-stop operations of the generator.

The decisive progress took place in the late 90s. New materials with particularly high tensile strength enable higher RPM. This allowed increased performance, energy density and efficiency to be taken to a new dimension. In addition, the power electronics / inverters and the drive technology developed steadily, which is why the economy today is higher than ever before.

Gerotor’s flywheel energy storage is made to improve energy efficiency of industrial processes – see how it works.